Reflections from the New Orleans walking tour of Black architecture 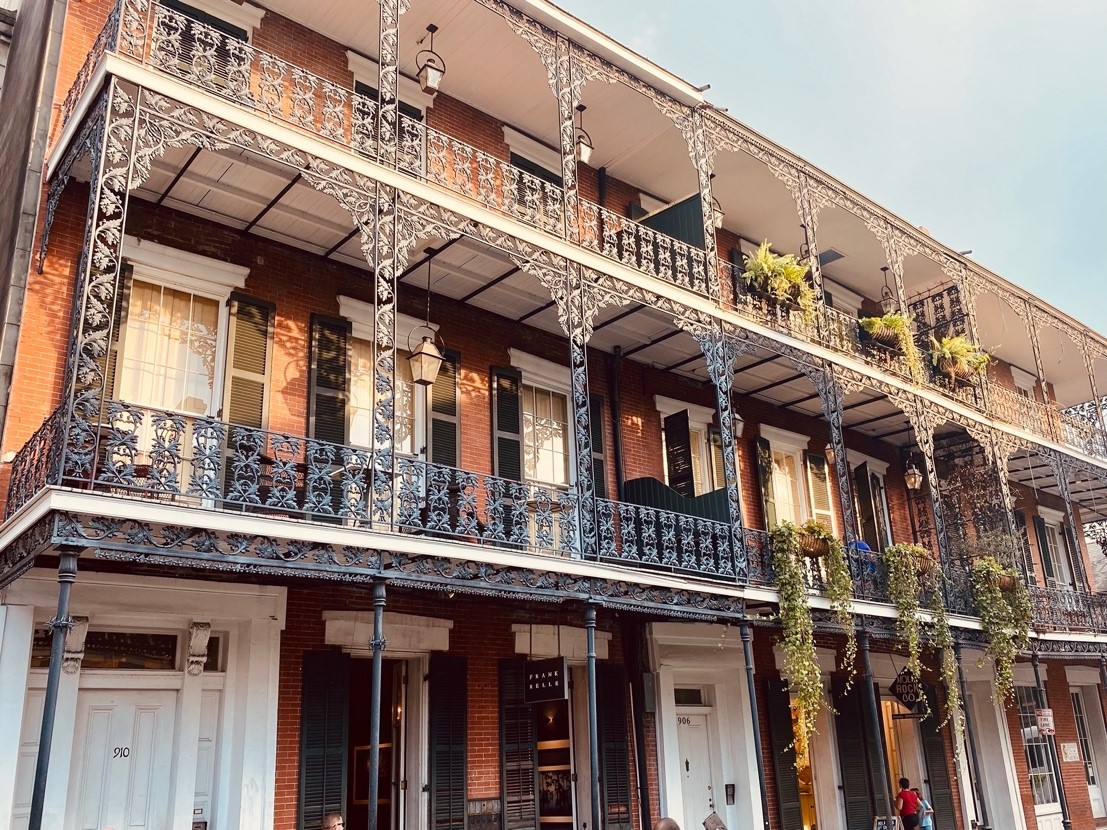 “Water made this land.” This is how Malik Bartholomew, a seventh generation New Orleanian and founder of Know NOLA Tours, kicked off his tour of African influences on the city’s architecture. He starts each walking tour of Black architecture with this phrase to highlight how the ground that New Orleans is built upon was once submerged in the Gulf of Mexico, and how over millennia the Mississippi River deposited the soil that would become the land we were now standing on. 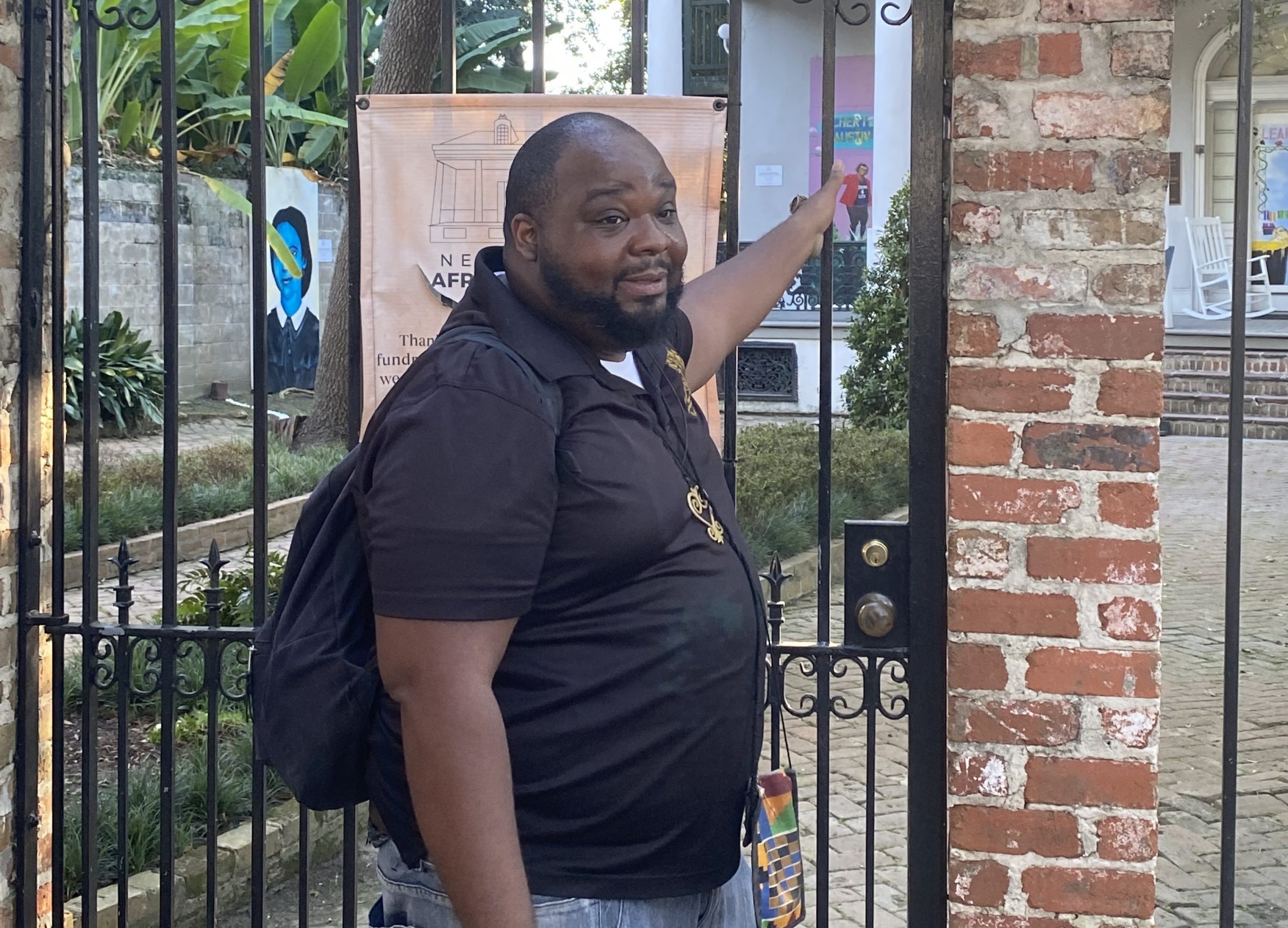 Malik Bartholomew, founder of Know NOLA Tours, led a group of AU attendees on a walking tour of Black architecture.

For the first time, this year’s Autodesk University (AU) was held in New Orleans. An advantage of a new location was the opportunity to explore a different city, its history, culture, and architecture–and connect that back to the industry and technology trends discussed at AU.

In my role at Autodesk, I lead the Architecture, Engineering & Construction (AEC) Audiences Marketing team and find that this intersectionality is where we see the true value our industry creates. 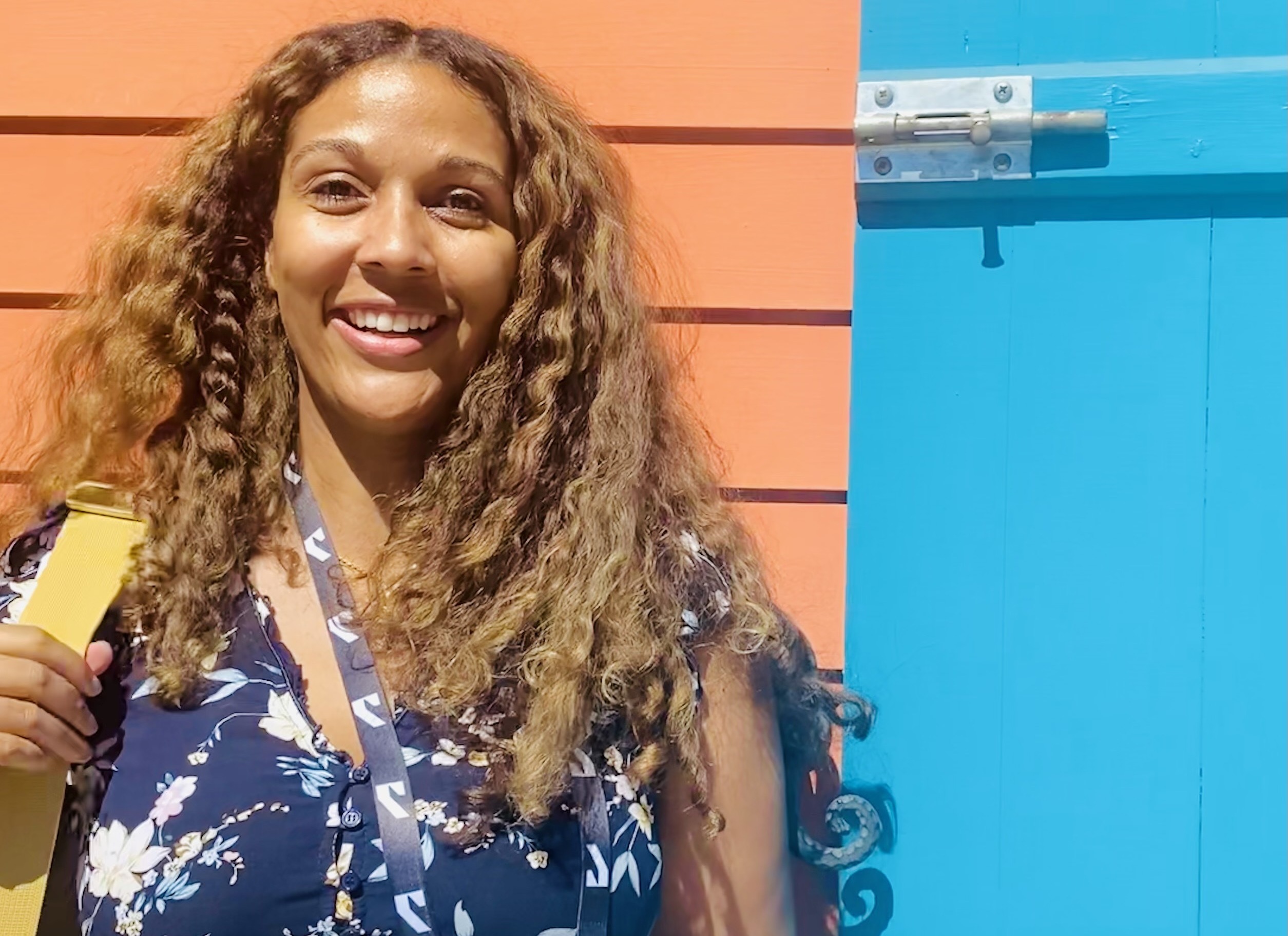 Hosting AU in a new location offered an exciting opportunity to absorb a different city, its history, culture, and architecture.

As part of AU, my team wanted to offer our customers a different take on the popular Community Meet-up program. With only 2 percent of U.S. architects identifying as Black or African American and the country’s leading architecture and engineering firms in attendance, we sought to put the spotlight on the significant contributions Black and African architects made to the industry. It was my pleasure to co-host one of these Know NOLA walking tours of Black architecture and discover the positive outcomes we see when architects come from the communities they’re tasked to build.

Touring Tremé and the French Quarter

It felt like we were going back in time while walking through Tremé, the oldest Black neighborhood in the U.S. Throughout this portion of the tour, Malik told stories that highlighted an existential struggle against an unhospitable environment.

For example, New Orleans was a swamp: humid, hot, and rife with mosquitoes. Despite the abundance of crawfish, oysters, and alligators, it was only when the French colonists brought over enslaved Africans, who knew how to cultivate rice, that they developed a stable food source.

Much of the New Orleans architecture is reminiscent of both north-central France and West Africa.

But the enslaved Africans brought more than just agricultural skills with them. Their ingenuity and artistry are what makes New Orleans’ neighborhoods so extraordinary. The intricate ironwork in the French Quarter includes hidden African symbols to signal to each other and those who would come after: “We were here, we did not forget where we came from, and we left our mark.” ​​​​​​​

In their colonization of the region, the French wanted to literally build a new Orléans and replicated features seen throughout north-central France that they knew would naturally cool their houses such as shutters, tall windows, high ceilings and front to back rooms. Other features like inner courtyards and porches designed for outdoor living reminded me of the family compounds you can still find today all over West Africa. 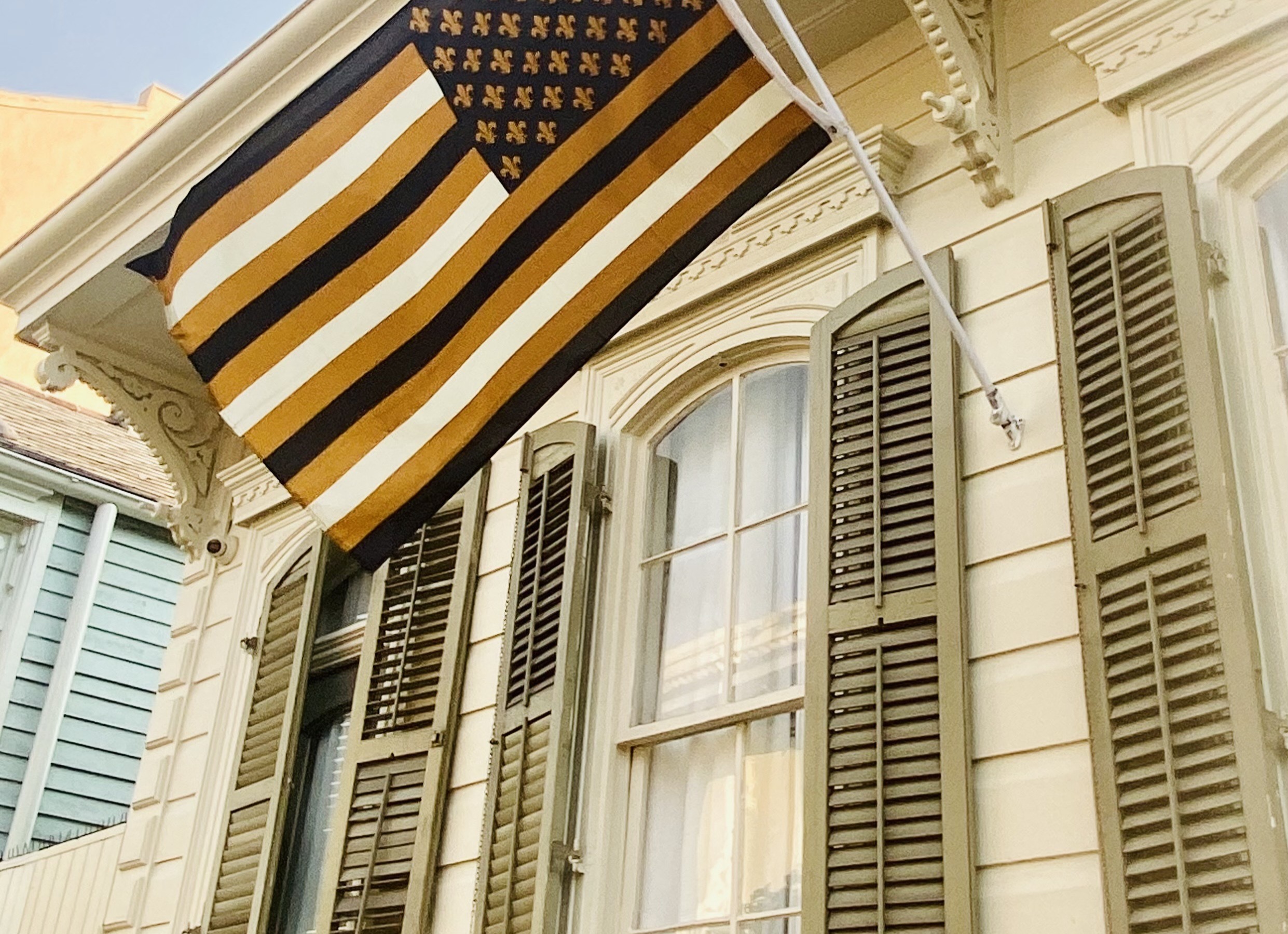 Shutters and tall ceilings adorned homes throughout the tour.

While on the tour, someone asked about the people who used to live in the houses of Tremé, now beautifully restored.

In response, Malik explained that New Orleans was one of the few cities where enslaved Africans could buy their freedom to join a growing community of Africans arriving from France, biracial locals, and freed Black tradesmen and women. Skills like carpentry and ironwork could provide a path to that freedom. The formerly enslaved passed these skills on to the next generation, who then used them to build the houses that we were now admiring in Tremé. 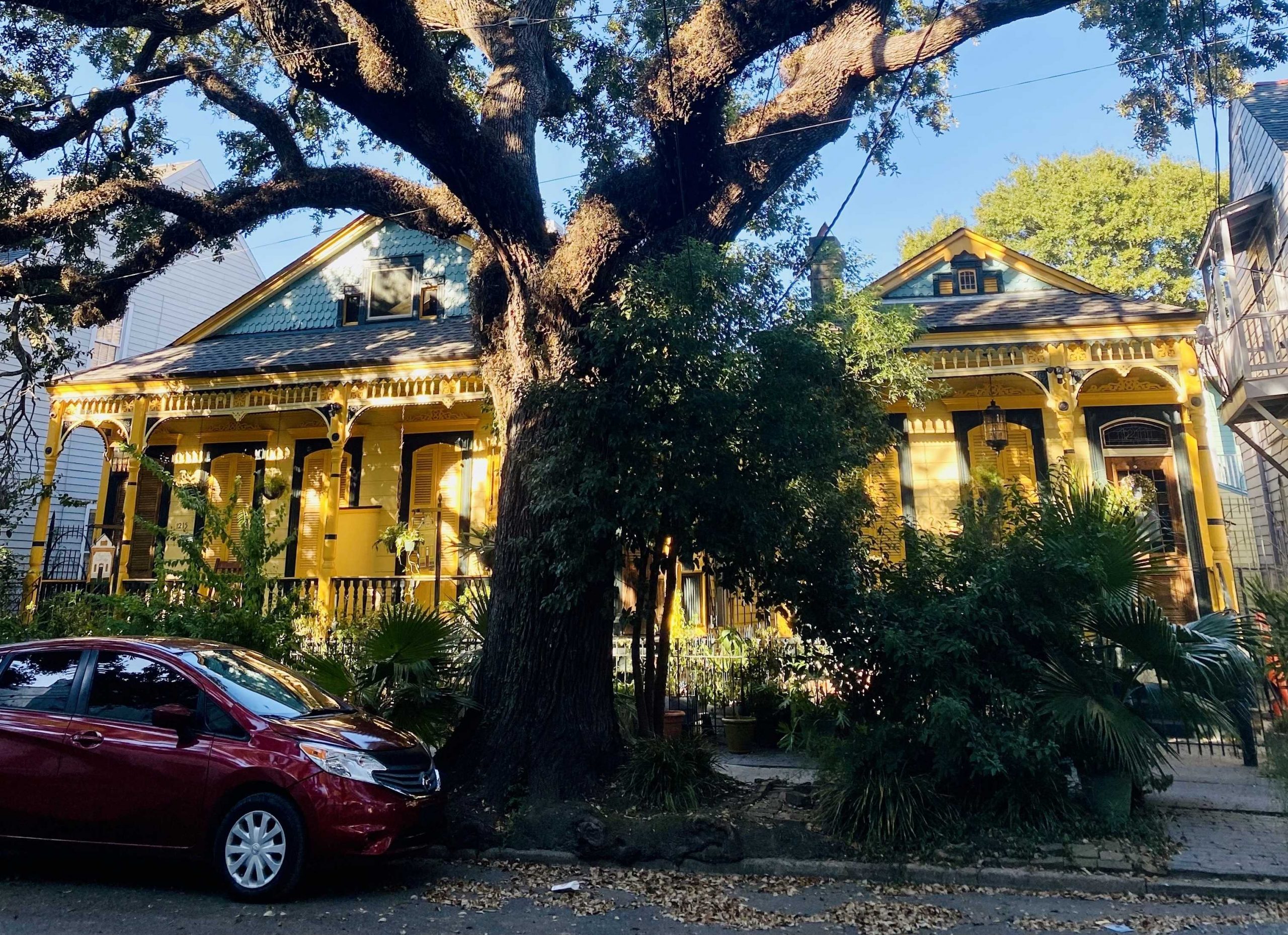 Many of the homes throughout Tremé have been restored to showcase their artistry.

Malik talked of neighborhood schools with marble floors and cypress trims. Education was a matter this community took especially seriously, which is obvious through the architecture. The local community center is also of great importance. Civil rights leaders Jerome Smith and Rudy Lombard worked there, building on a musical tradition that also shaped Louis Armstrong, who played music in the Storyville section of Tremé. 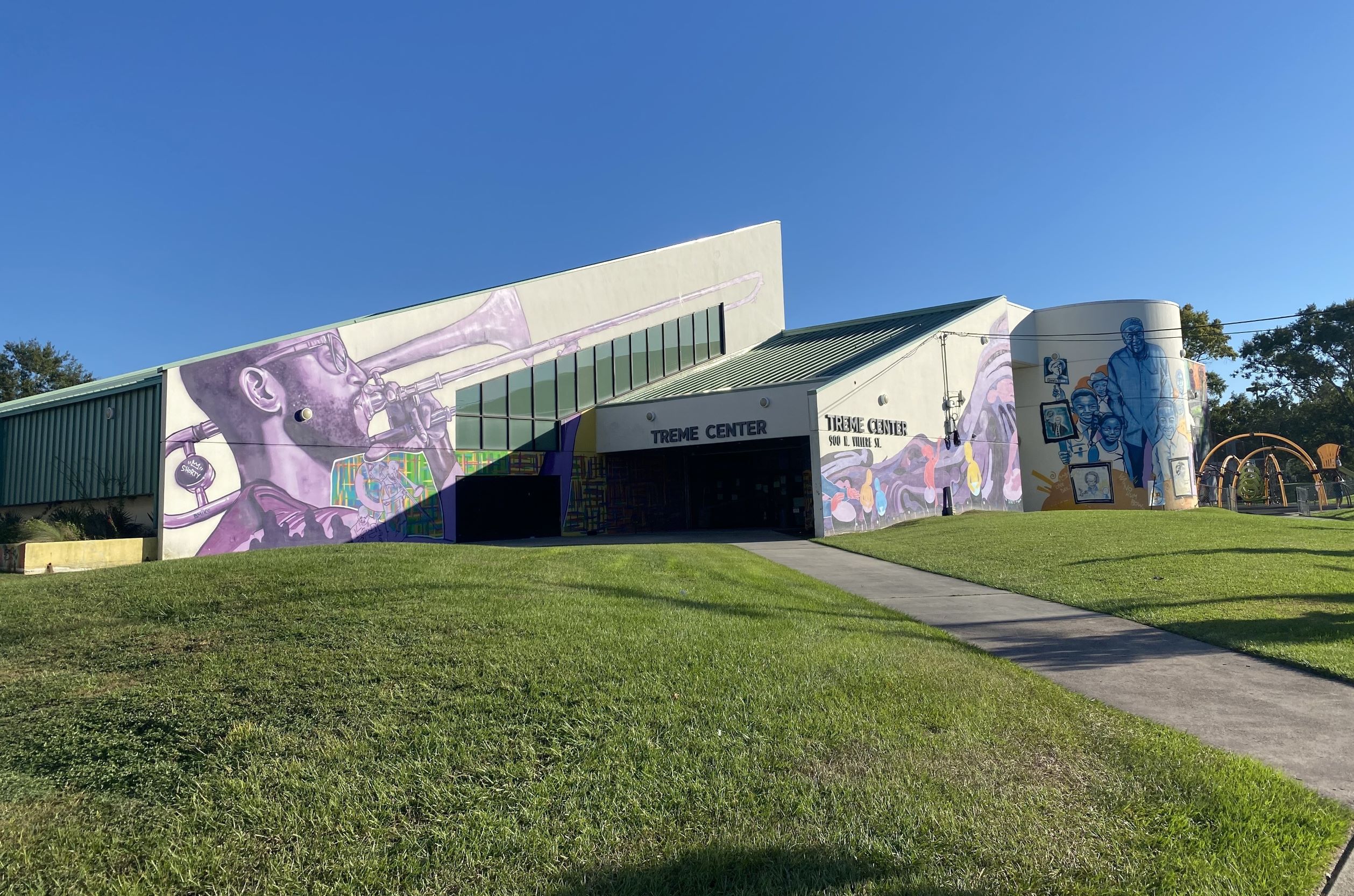 The community center has offered a space for Tremé residents to connect for generations.

When talking about water, the element that can make an area both desirable and inhospitable at the same time, Malik quoted his mother who calls anyone a fool who builds their house on the ground. “A swamp is a swamp and will always be a swamp,” she said after Hurricane Katrina. The struggle to keep water out of New Orleans is older than the city itself. Black and Indigenous communities have long advocated to live with the water instead of fighting it.

Yet it took one of the most disastrous hurricanes to ever make landfall in the U.S. and a new generation of urban planners and civil engineers, like Meagan Williams, to finally convince the city to take a new approach. Rather than trying to tame the water with levees, the city is now using green space and vacant lots to capture and then slowly release it into the waterways.

Learn more about Meagan Williams and her work as stormwater manager in New Orleans.

Looking back at the pictures I took on this walking tour and reflecting on the week in New Orleans, Malik’s stories aren’t just about struggles in an unhospitable environment. They are about the resiliency and beauty in the face of adversity when communities are empowered and their voices are heard.

And New Orleans isn’t alone in its to work to mitigate rising sea levels or right the wrongs of racist city planning practices. Climate resiliency, for example, is a priority issue for coastal areas like Boston, San Francisco, and the Netherlands.

Leaving the tour with new perspective

The most rewarding aspect of my work is telling stories about the impact Autodesk’s technology can make in communities around the globe. My experience touring New Orleans was more than a walk through some historic neighborhoods. It provided me and the fellow attendees with important lessons to bring back to our own communities and the work we do building the cities of tomorrow. 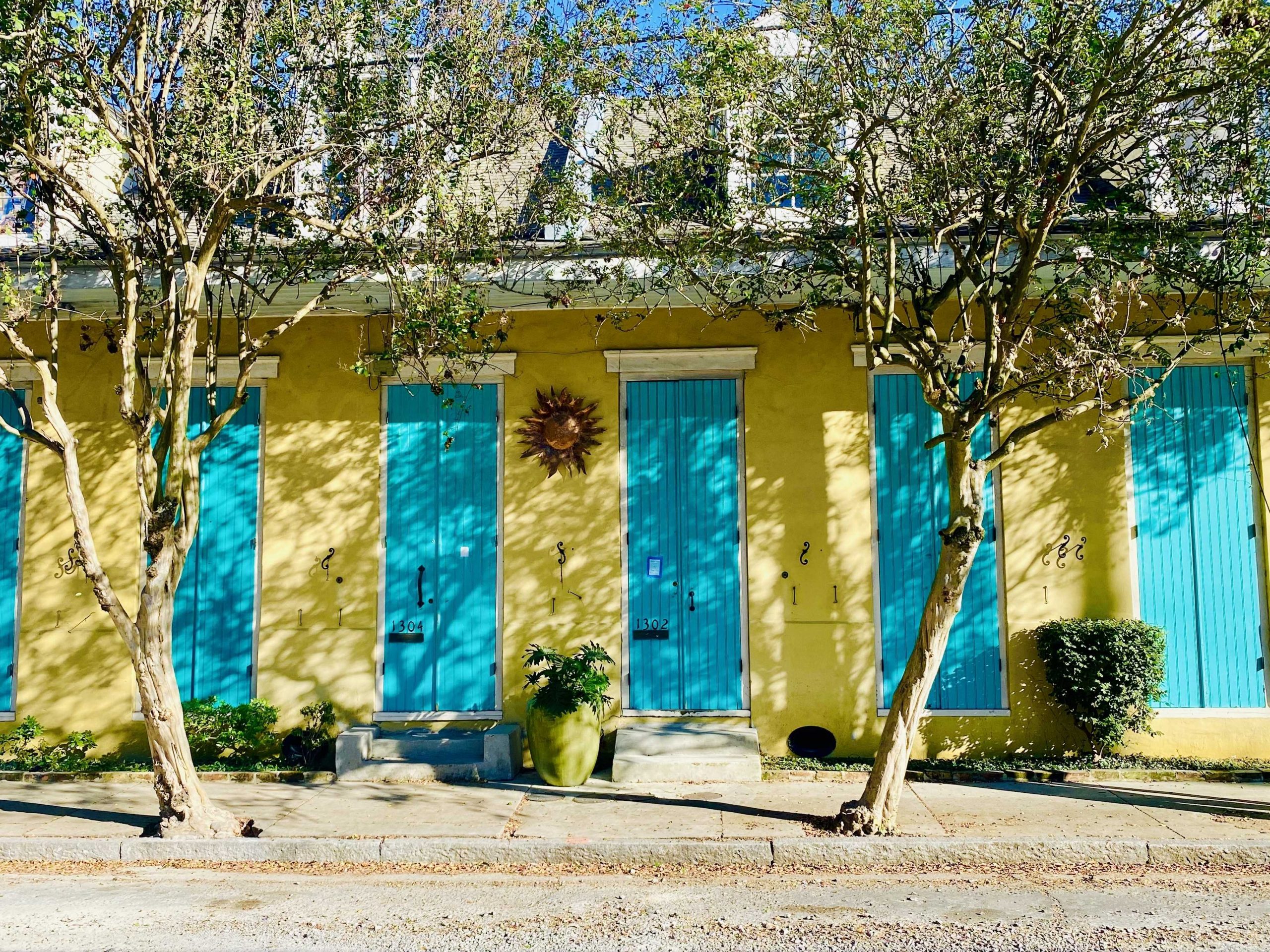 Beautiful colors adorned many of the buildings throughout the tour.

When we reimagine former prisons as lively neighborhoods, move highways that isolate neighborhoods underground, or invest in green stormwater infrastructure, we are building a better world for ourselves and generations to come.

While the NOLA tour highlighted architectural work from more than a century ago, I’ve come to realize that the approach of empowering communities to create their own built environment is making a comeback.

From Medellin in Colombia to Nairobi in Kenya, organizations at the core of the housing crisis have identified community involvement as the secret sauce to their success. And that’s something I believe our technology can enable everyone to tap into, from planning to construction. Let’s get to work.