ALL IN at Cisco Live 2022 Melbourne: Building Security Resilience for the Modern Enterprise

The evolution is here: What you need to know about Work3 right now 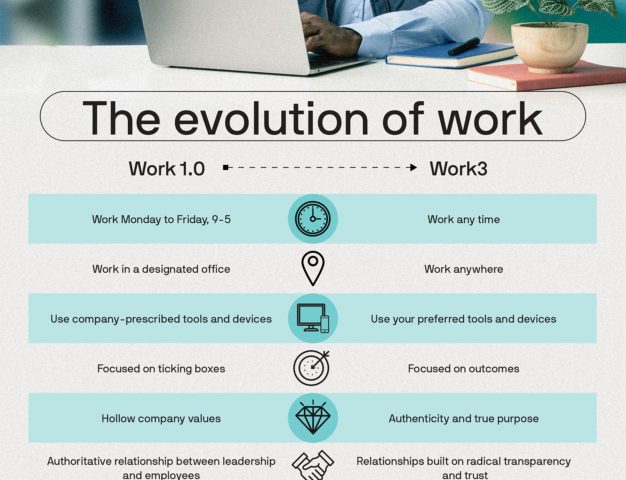 In case you missed our approximately 10,000 articles, posts, and tweets about it, Alludo recently conducted an ambitious survey to gauge the state of the remote and hybrid workforce. The results were clear: employees and leaders are not on the same page when it comes to the future of work.

Employees want to work when and where they want. The majority of leaders are still clinging to a lifetime of expectations about what management should look and feel like. Everyone’s frustrated.

The solution isn’t for employees to give in, or for leaders to wave the white flag and invite anarchy. Instead, the solution is to bridge the gap by embracing a whole new way of thinking about work.

Work3 is not simply a new phase of work, but a whole new playbook. It’s about decoupling work from time and space, giving people the freedom to work when, where, and even how they do their best work. It demands that leaders give up the temptation to micromanage and instead set clear expectations and a cohesive vision and focus on outputs, not inputs.

Work3 is an evolution from Work 1.0, which is the “tick boxes and keep your head down from 9-5 in an office” model that has dominated since the industrial revolution. Work 2.0, spurred on by the pandemic, was a step forward—but it was largely a geographic shift, not a philosophical one. It simply transferred all the structure and expectations of Work 1.0 into a remote and hybrid landscape.

Work3 is the way forward. Here’s a deeper dive on exactly what Work3 is, and why it’s such a major breakaway from Work 1.0.

If this feels like a major shift, that’s because it is a major shift. It’s enough to spur an identity crisis for leaders who are used to being measured on how well they keep everyone in line. And yet, done right, this shift is as freeing and empowering for leaders as it is for employees.

What’s at stake for businesses that don’t get on board with Work3? High turnover. Lower employee satisfaction and engagement. Lower productivity. Resentment. Burnout. In other words, it’s not a good outlook. Work3 may involve some discomfort and growing pains, but the outcome is well worth it—and, after all, Work3 is all about outcomes.

The evolution is here. Ready to learn more? Read the full survey report.

The post The evolution is here: What you need to know about Work3 right now  appeared first on Alludo Blog.